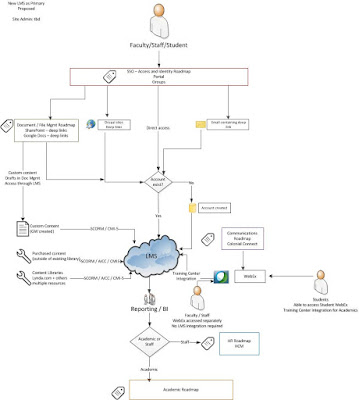 This is just one option.  This does not reflect the direction we may actually head…

—————————————
I have found that 6 months – 1 year out from the end of the LMS contract (or whatever the “core” of your ecosystem is) is a good time to re-evaluate the ecosystem and take a close look at the environmental factors surrounding the ecosystem.

In our case, there are some major environmental changes afoot.

1) The chance of us being able to have one learning ecosystem (vs separate ecosystems for staff and students) is greater than it has ever been.  It never made much sense to me that we had 2 separate and practically parallel systems doing pretty much the same thing.

2) Our leadership has finally realized that how we do business is unsustainable.  We might be able to afford multiple systems doing the same thing now, but we won’t be able to afford that much longer.  The willingness to make some hard and uncomfortable decisions is much higher than I’ve ever seen it.

4) Our IT group is now thinking in terms of roadmaps for those technologies. As a result, I have a better idea of how the ecosystems that touch the Learning Ecosystem plan to evolve.  I can plan the next iteration of my ecosystem to account for and support that evolution.

In my mind, these are positive environmental changes.

In a recent meeting, one of my favorite mid-level managers said the following:

“Probably the best thing we can do is take the checkbook out of everyone’s hands. THAT’S going to force an awful lot of conversations, compromise and creative thinking. We’ve been too comfortable for too long.”

I’m gearing up to get mighty uncomfortable.
And to give up a lot of what we’ve been doing for the past 7 years.